April 04, 2011
This winter I went with my son on a class field trip to a local fine arts center.
As we filed into the building and situated ourselves in our seats I noticed a lovely little girl with her mother. In my opinion there was not much about the daughter or her mother that were out of the ordinary, or unattractive, for that matter. Both were nicely dressed and well-mannered.
The auditorium was almost full and we were making our final adjustments before the show opened.
The lights went down and the theatre became hushed.
That is when from behind me, I overheard the mother tell her daughter that the reason she hadn’t worn her ‘other’ pants was because they were too small.
My son is in the first grade. He and most of his classmates are only six, and so maybe the initial comment went over the daughters head.
And since children are still growing at that age and they find the need to wear bigger sizes every few months anyhow, she probably didn’t think much of mommy’s clothes not fitting her anymore.
It’s what the mother said next that made me cringe and bite my lip.
‘I guess I gotta lose some weight, huh?’
GULP….
I have no idea why this mother was expressing concern about her weight; I did not see anything wrong with her. She looked very fit and was quite beautiful, to say the least.
What baffled me more was why she felt the need to share her thoughts with her first grader!
Didn’t she didn’t realize what this could do to her child?
It is no secret that not all women are happy with their appearances, and that includes their figure. The average age that a young girl in America begins to diet is: too young!
There are studies everywhere that reveal the ages at which young girls begin having poor body images and I’ve always blamed Hollywood for this; with all of the airbrushed models and voluptuous actresses featured in movies, videos and on magazines…it seems that the message is ‘here’s the norm-now hurry up and strive for it’.
Though, right in front of me, on an innocent field trip to an elementary school play, I watched a mother unintentionally, though singlehandedly, begin programming her daughter to become preoccupied with her weight; and needlessly!
The woman was not overweight, not by a long shot! And, at six, the young girl should have been encouraged to discuss what going to happen in the show, maybe the history of the theatre or the work it took to make the set and some of the costumes.
The little girl should not have been forced to listen to her mother convey her insecurities about her figure.
Okay, so it’s about the mother you say. And how does this relate to the little girl?
Monkey see-Monkey do. 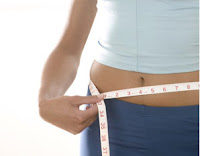 The child doesn't know why…She just follows in her mother’s footsteps. Being a mother who is preoccupied with weight will affect our daughters greatly.
It will teach them that, although we might be a very smart, dedicated woman, mother or wife; a concerned citizen, hard worker or even physically fit or beautiful, – still our weight will always be an issue to us, and we will continue to measure our worth and beauty according to the clothes we used to fit into and what the scale says today.
Self acceptance for women seems to be an ongoing struggle. We tend to compare ourselves with the next woman and define ourselves by our accomplishments and our physical beauty.
If we stop doing this and accept ourselves for who we are, what we look like, and what we were born with, then the nonsense-insecurities can stop being passed down to our daughters.
Most recently I was back in the classroom for another event. As we sat down to eat our lunches, one of my son’s female classmates pointed to a class photo that she was in which was pinned on the wall; she looked at me and asked, ‘did I look pretty in this picture?’
Ugh…
And I’d thought I had heard the worst of it.
Mother’s: accept yourselves for who you are and what you were given so that we may encourage young girls to do the same.
Let’s create beautiful women from the inside out.

A Note From Amber:

While weight really can be an issue due to health concerns or unhealthy eating as the cause, mothers may want to take note that young children and teens do not differentiate between ‘necessary’ weight loss and ‘unnecessary’ weight loss and this is where it can be confusing to a young impressionable girl.
If your need to lose weight is legitimate, please check out these websites and also be conscious of the reasons for your dieting and then share them with your teen…as she may not understand that she doesn’t need to diet. To her you are beautiful no matter how much you weigh or what you look like in those pants.
But, if you don’t think you look beautiful the way you are, you send her a message that ‘she doesn’t look beautiful the way she is’.

A study from SIRC (Social Issues Research Center)
http://www.sirc.org/publik/mirror.html
About half way down the page in regards to the  study is this:

Children: Female dissatisfaction with appearance – poor body-image – begins at a very early age. Human infants begin to recognize themselves in mirrors at about two years old. Female humans begin to dislike what they see only a few years later. The latest surveys show very young girls are going on diets because they think they are fat and unattractive. In one American survey, 81% of ten-year-old girls had already dieted at least once. A recent Swedish study found that 25% of 7 year old girls had dieted to lose weight – they were already suffering from 'body-image distortion', estimating themselves to be larger than they really were. Similar studies in Japan have found that 41% of elementary school girls (some as young as 6) thought they were too fat. Even normal-weight and underweight girls want to lose weight.

DON'T put your daughter on a diet

Not even if she’s overweight. And not even a 'moderate' diet. Unless you want to increase her risk of developing an eating disorder...continued at:
http://www.sirc.org/news/diet.html
Want to lose weight for real, because your doctor said you should or because your child’s pediatrician suggested the kids cut back on junk food?
Make this one change which is focused on eating, instead of NOT eating:
WebMD : LOSE WIEGHT-EAT BREAKFAST
http://www.webmd.com/diet/features/lose-weight-eat-breakfast
A Woman’s Worth is a book that I read six years ago. I am in my late 30’s and found it to be a small book but which shared a profound look at how a woman views herself and how she should view herself.
Marianne Williamson has a website and is currently featuring her book:
A Course On Weight Loss.
Watch her moving talk on YouTube:
http://www.youtube.com/watch?v=QxALXIjlHwY&feature=relmfu
Visit her at: http://marianne.com/index.php
body image Marianne Williamson mothers teen body image teen girls weight loss