Committed to the Team 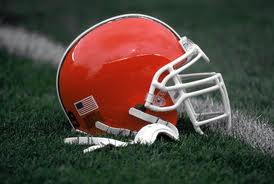 I’ve been a Browns fan for three years and this past season I finally understood the slogan, ‘There’s always next year’.
I'm also beginning to think that being a fan of a sports team is sort of like being in relationships.
There are days when someone on your team is going to miss the mark.

Likewise, in your relationships, people will probably not always be at their best (neither will you).
I suppose that we are all allowed that. But when expectations are high, sometimes it can be a downer.

We can become discouraged and doubtful.
As many of the Cleveland Browns fans know, our team isn’t always at their best.
But what is their best?
Is their best how they are ranked among other teams?
Or, should we gauge their best against themselves in the previous game, year, or decade?
Commitment takes patience and faith.
I wanted to drop the Browns as my team after this past year. I was frustrated and saw no vision or goals whatsoever. I felt the Browns did well at the beginning of the season in comparison to last year, then they devastatingly rebounded into old habits and left me hopeless.

I was angry and felt let down as a fan.
But, I found out that just like in relationships, if we quit when things are going bad, than we aren't actually committed.
No one can be at their best all of the time. We all know, because we are human.
I have to view it like this: a small improvement is enough for hope. And a cruddy season, isn't great enough reason  to give up.
In relationships, as well as being a sports fan; you’re either in, or you’re out.
If we say, 'You WIN, I CHEER!, but You LOSE, and I QUIT! than we aren't really committed.
It’s when you reach out and offer your hand to your teammate to help them up from their fall, is when you show your true dedication.
Show your commitment to your team and support them while their down…it’s the only way to get the best results.
And...as we say in Cleveland...

(And of course with the current state of the NFL, we pray that there is a next year.)

'Individual commitment to a group effort--that is what makes a team work, a company work, a society work, a civilization work.'- Vince Lombardi