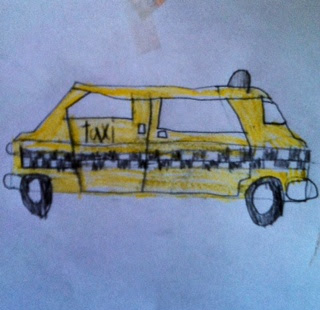 For Christmas, my son received a cool car drawing kit. It came with a small light box, colored pencils and some really great car templates. The templates are made of clear plastic and when he places them on the light box, he can trace them onto a piece of paper and viola- he has an amazing vehicle to color.

He also received a booklet of coupons. (All of my kids do at Christmas-it's become sort of a tradition.) Inside the coupon book (which is hand made) they get a bunch of free passes for stuff (mostly 'time doing something' and some have 'time with a grown-up'). The coupon's are a way for the kids to land a parent, on the spot, and sit down and play...It forces the parent to say yes, and drop everything, instead of a half-reply of 'maybe', 'not now' or 'later'.

This weekend, I was couponed.

And he wanted us to use his new drawing set.

As we began to create our cars, I used the templates in the way I saw they were meant to be used. He on the other hand, stayed with his own rendition of how it was supposed to be used. His little pictures were adorable, and all so much cooler than mine (he'd clearly been practicing), but as I inspected the car templates closely, I noticed he had not yet use the template in a variety of other ways that were offered.

So, I brought it to his attention.

He was puzzled at first, then all at once he became flabbergasted!
He was stunned when he realized he now had about twenty five more ways to create these cars!

This was funny, but then again, it wasn't funny at all.

It reminded me, that just because a child gets an age appropriate gift, doesn't mean he knows how to use it to it's fullest potential.

It reminded me also, that this was the exact reason why I gave him the 'time coupons'.

I'm a busy parent, and as much as I know my kids need me to sit down with them, I don't always do it as often as I should. (I know better... but time gets away from me and good intentions are sometimes lost.)

Since our play-date this afternoon, he and his older sister have been tracing new cars and coloring them for hours using the newly introduced ideas.

That right there proved to me that those coupons were so worth it...

Because Mommy stopped what she was doing, sat down, and played...and it was a good thing.... because kids don't always read directions.

What little things do you do to help you to stop, sit and play with your kids?