January 29, 2014
This past fall I attended a sporting event for one of my children in a nearby community. It was being held on a football field of a school where a shooting had occurred two years ago.

As I made my way from the parking lot to the back of the school, I walked by one of the front doors and took notice of a large window sticker. I stopped to read it. As I did, it chilled me to the bone and made me nauseous.

THIS was supposed to be some form of deterrent- some sort of prevention….

THIS WAS A STICKER- and it was intended to change someones mind from carrying a weapon past the point of where I was standing…it was supposed to prevent terrorism or murder. 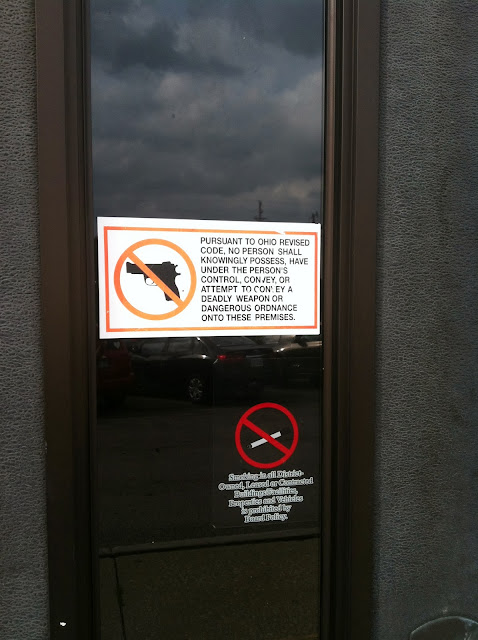 I was sick…
"too late" wasn't even an adequate thought at that point, "too weak" was a better one-
And anger was the emotion which followed.

As I stood there, unable to move or think past the fact that children were murdered there, I felt helpless, as I know many parents do in the face of incidences like this one.

I stood on the grounds of what once was looked upon as an excellent school…
It actually still might be (especially in the love shown to it's students, community, service people and teachers), but it has has a scar. A big one.

A post I read recently said much of what I was thinking at that moment…. At one point, I actually wondered if the writer was in my head, because I couldn't have said it any better:

1. I personally believe we should be allowed to own a gun. I've shot guns, and I'm not at all opposed to the right to bear arms.

2. I believe we should be able to trust we are safe in public and at home.

3. I believe we should be able to take rightful defense in the event we feel threatened.

4. I believe that gun-wielding people aren't the only way -or the #1 way- we can die (in fact, it is less likely we'll die in this manner).


But, regarding the random shootings happening in our society today, I do believe, 100%, without a doubt, her very last sentence, and I say it to myself everyday as I send my children off to school- and then say it a minimum of 100 times over on a day I read about another shooting....

When will it stop?

Can we stop it?

What will it take to stop it?

Is there enough being done to attempt to stop it?

Because, what we're doing now doesn't seem to be working…
...Hence the sticker...

Whether this sticker was put on this door before or after the school shootings, someone please tell me what good it actually does? Please please please for the sake of the folks involved, hurt, killed and struggling after violence like this strikes, please look at the bigger picture...

We have a bigger problem than gun control and a much greater loss than the lives than the people killed. We sometimes lose the hope, faith, and service of the survivors after such tragedy. We- ourselves- tend to lose our comfort, faith and freedom, and don't forget, we lose the murderer as well. Whether the guilty one commits suicide, or gets shot, or ends up going to prison, we lost another soul--and clearly a soul which was lost long before the day he or she pulled the trigger. Read my February County Kids Magazine Article & My Note To Legislature and other thoughts.

We need to start working on where the problem is, not the by product of it- the gun was the weapon, not the cause. It was the tool-not the mastermind. Think about it, we don't ban cars from the streets after a drunk driver kills someone…what good would that do? What good is a gun law if the killer isn't the gun owner? And, what good is a sticker, when we can clearly see these people aren't law abiding citizens?

Below is a section from an online article published on October 21, 2013, by Catherine E. Shoichet. Amanda Watts and Chuck Johnston, CNN:

Another shooting occurred at an Atlanta middle school in January, the same month a California high school student wounded two people, one seriously.
The Nevada shooting also comes almost a year after a gunman killed 26 people at Sandy Hook Elementary School in Newtown, Connecticut, igniting nationwide debate over gun violence and school safety.
The mother of a student killed in December's shooting in Newtown said Monday's shooting was reminder of the need to find solutions to keep students safe.
"The unthinkable has happened yet again, this time in Sparks, Nevada," Nicole Hockley said in a statement. "Our thoughts and prayers are with the victims, their families, and the children of Sparks Middle School, who today came face to face with violence that no child should ever experience. It's moments like this that demand that we unite as parents to find common sense solutions that keep our children -- all children -- safe, and prevent these tragedies from happening again and again."
_______________________________________________________
In the meantime, while our legislature takes their best shot at tackling the problem, you are a parent with the same questions and concerns as me…so please get involved, ask questions, and educate yourself on what is happening around you in the way of prevention and addressing the issues at hand. To start you off, please check out this list of resources which are helpful for you to get involved and educated:


PAGE FOR PARENTS RE: SCHOOL SECURITY

KEEP UP TO DATE VIA FACEBOOK ON SCHOOL SAFETY NEWS

FOR PARENTS: ABOUT SOME IDEAS ON POTENTIAL SAFETY STEPS REGARDING UNADDRESSED SCHOOL SAFETY CONCERNS