R.I.P.: In the Line of Duty-Alaska State Troopers 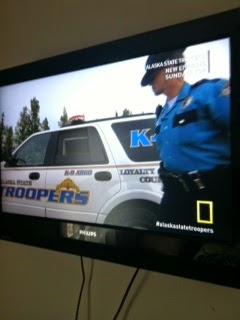 Our local police officers always react casually when my 9 yr old son tells them that he wants to be a police officer. I don't think that they take him seriously. Maybe it's because all little boys say they want to become cops. It got me thinking…

One night, when my family and I were traveling, we were watching one of my son's favorite shows, Alaska State Troopers. There was a really scary scene where the officers were searching for a very dangerous suspect on foot, trying to sneak up on him, guns drawn, at the man's last known residence, and presumed he was inside. After that show there was another, complete with an action packed chase scene. Watching the flashing lights and sirens, with cruisers driving at breaking speeds, I really did begin to wonder why it has been my son's desire for the last 7 years to be a police officer in this crazy world…

It must be the fast cars and fancy lights.

By the look of disgust- I was wrong. If that wasn't enough, I surely knew I was
when he practically spat his answer at me, complete with a hand gesture towards the T.V.-

Today, I write out of sadness, and the utmost respect for these two real life Alaska State Troopers killed in the line of duty. There are so many men and women who serve our communities, and who have families just like we do, and who go to work every single day knowing that this job might end their life way earlier than they'd like…and their families know it too- they just pray it never happens. But it sometimes still does. My heartfelt sorrow, appreciation, and prayers, go out to those who put their lives in danger, to make the world a better place. To their families I can only say I'm sorry, but also thank you, for supporting your spouses (or child's) career, they died trying to protect their community and we are ever so grateful for their service.

Just like the military men and women, and first responders in all areas and fields,  we need brave souls like them, and their loving families- who are just as courageous.