The Pope on The Sports Page, Soccer and People 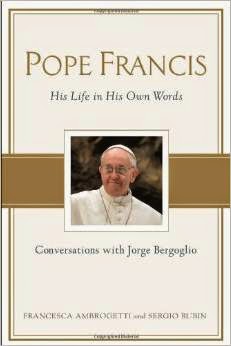 This past weekend I had the chance to sit down and read the newspaper (yes, I'm one of those people).

As I scanned the front page, then flipped to the sports section where I usually end up, I saw a great deal regarding the World Cup. Since I don't follow it I kept on skimming. I was surprised to come across the Pope quoting before the World Cup. I've been reading a book about him, and love quotes, so it caught my eye:

'To win, we must overcome individualism, selfishness, all forms of racism, intolerance and manipulation of people.'
-Pope Francis.

One of his stature, he could have chosen to speak of religion, faithfulness, God or the bible, but instead he decided to use his position and power to send a message like this one.


One which reminds us of what's wrong with the world today.

For decades we have been fighting prejudices of all kinds. There  are people everywhere who are starving for love, and there are even more people preoccupied with their obsession for power, are void of empathy, responsibility, and have no respect for others, and who will stop at nothing to exploit those looking for integrity, kindness and a tender heart.


Pope Francis says it like he sees it and isn't afraid to point to the world
and ask us how we will make a difference.

I've never followed a Pope before, but I can tell you that I'm liking this guy…(can I call him that?)

It's disappointing some days, being a parent and having to explain to my children that there are 'bad people' in the world who only have own their best interests in mind. It's tough when my children trust someone who backstabs them, lies to them, or puts them down in attempts to gain some sort of upper hand….(those are all the adults, never mind the kids). So far, two out of three of my children say they want children of their own someday.  Truthfully, if society continues on the way it's going… I'm not sure they'll feel the same way in ten years… I'm not sure how I feel. But, I'm hoping that it somehow gets better.

While our Pope might stand for a higher power- one that some might not believe in- he should revered for his honesty, and praised for his desire to hold us accountable and ask us to be the change. He should also be applauded for knowing how to teach people the bigger message, knowing that you need not beat people over the head with it for them to get it. Right on, Pope Francis.

He is sharing a similar message Family Matters has always believed is what we need to carry with us as well as instill in our children:
Give love, kindness, patience, understanding, respect and communication…
and expect no less from others.

I dare you to read more from Pope Francis: "His Life in His Own Words".
Simple read, it's real, and you'll learn a lot about him and the way he thinks. We are very lucky. The Pope is a pretty awesome guy (there I go again-calling him a guy…is that alright…? Eh, I have a feeling he'd be okay with that reference; he seems as though he is up with the times).