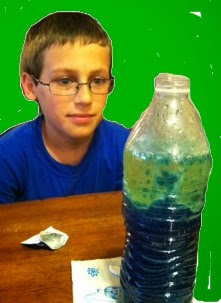 So, this weekend, my son put "allcasester" on the grocery list.

When he asked if I'd seen the list yet, I gave him a weird look at first. Not only because I could not read the word he had spelled, but because I was wondering why he needed whatever that word was. Then I remembered that he'd learned some cool things in science this week… one included Alka-Seltzer .

Truth be told...I had already noticed his 'update/request' before he asked me. It was tucked in my purse for my weekly trip out. At that point though, I wasn't convinced I was investing in wasting a box of medicine (or the money).

As I arrived in the medicine aisle of the grocery store, I finally found the boxes of cold/flu medicines. The cost for just one of these multi-package boxes was around $5.00. I already had a full grocery cart and thought to myself, 'Do I get this for him to recreate his teacher's science experiment or do I skip it?'.

I don't usually think this next way, but I figured I could just say that they didn't have the right kind, or  that they were all out; he'd probably forget about it by next week (enter Mommy guilt).

I remember when my middle schooler was a little girl (three or four years old). I used to let her go to town in the kitchen and use my pots and pans; mix up water, salt, pepper and whatever else she wanted- and by the time she was seven, she was actually putting edible stuff in there (and was making me eat it- YUM).

Now that she is older (and has better taste buds), she is becoming well versed in the kitchen, and it was all on her own power- I never forced her.

I believe that a natural curiosity, plus being allowed freedom with my things (and my kitchen), gave her the love of cooking. Today she knows how to make over easy eggs with delicious seasoning, cuts various fruits and vegetables and prepares beautiful plates and salads with them, knows how to make potato salad, salmon, bake cakes, holiday candy and some of the meat for our dinners.

All kids have inner talents, gifts and skills that are just waiting to be honed.

It's a parents' job to help a child foster those.

When I returned home with the box of fizzy medicine, the boy lit up like a Christmas tree, pushed past me for some cooking oil and the saved empty water bottle, then asked for blue food coloring. He promptly began pouring, mixing and tipping this bottle of liquid, and he had our attention. He couldn't have been happier when all three of us girls oohed and ahhhed at his lava-lamp looking bubbly thing.