To Tattoo Or Not Tattoo? 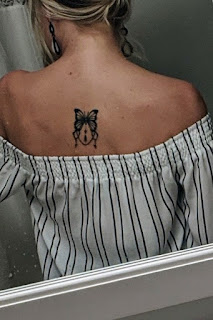 So your teenager wants a tattoo...?
Oh...what do you do?
To Tattoo or not to tattoo?
That is the question...for so many parents, including me and you.
Nope. I'm not a poet, just inspired by the topic a bit and by my friend who writes rhyming greeting cards lol.
In all seriousness....this really was the question for me when my oldest child (and daughter) asked me at 15 years old about getting a tattoo.
It was the question my 17-year-old (youngest daughter) wrote home from basic training stating that as soon as she was out of this education phase (and in the Big Army) she was promptly going to get a tattoo.
It was the question my 16-year-old son posed recently after his two sisters got their tattoos and he wanted one too.
I chose to tattoo.
Literally. (That butterfly on the back? Yeah, that's mine. I'm 47. It's my first.)
I actually got a tattoo. I did! But not just one! I got two of my own.
Both were done along with my youngest child and my youngest daughter.
Why, did I give in and let them, you ask?
Because they're either going to get it with me or without me, with my consent or without my consent... somehow, someway, they will eventually do what they want.
So why stand in the way? I mean, does my opinion actually matter to kids these ages?
This is a concept that all parents must learn.
And, sooner than later preferably.
The more a parent provides an opposing opinion, the more their child feels judged. The more a parent says no, before hearing the reasons why the child wants to do what it is they're telling you they want to do,  the more they will push to make sure they can (and will) do it.
So does it seem a little weird to see them walking around with permanent ink on themselves?
No, not anymore. It doesn't even matter.
Does it feel odd to look in the mirror or down at my arm and see ink on my own body that I know is permanent? Yes, kind of , in the beginning😂. But it's there and it's not just anything, it's an expression of something I feel or something I went through or something I shared with my children or something I felt. And in the end, it's something I shared with them.
Too bad I wasn't totally ready for the tattoo idea on my own body when my oldest did it...(I'd thought and talked about it for about 18+ years, just never did it). Well, there's still time so maybe someday.
I will warn you about tattooing yourself though,.You probably won't just stop at one...like eating potato chips! LOL! I already have my next idea in the works! These two happened within a month of each other lol.
This whole concept of 'to tattoo or not to tattoo a teenager 'can be applied to anything when it comes to what your children want and how they express themselves to you about what they want.
It's never wise to shoot them down ASAP, No matter what your reasoning is. I've never done it, and I won't ever change. I have and always will hear my kids out.
As one of the first posts I had ever blogged, and columns I've ever written... children deserve to be heard, their feelings and desires respected, and their own individuality considered. (One of my most read topics next to 'Do You Tuck Your Kids Into Bed?')
I'll update you on who tattoos next :) Lol.
Happy Friday!