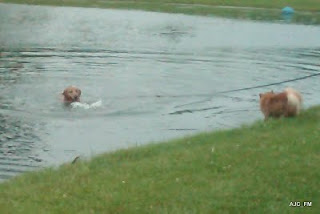 My nine year old loves dogs.
I do not have a dog. I used to have a dog, but it was at least 15 years before she was born.
I could not tell you where her love of dogs comes from. I guess from herself.
I do know that the only way I could get her to read at age eight was to buy her old Lassie chapter books….it grew from there (the reading AND the dog-obsession).
This past weekend we went to something we’ve never had a chance to go to: Working Dog Weekend at the Lake Metropark Farmpark.
The prospect of going didn’t seem possible at first, since on Friday night my daughter was sick with the stomach virus and a high fever. Any activities for the weekend, at that point, had been canceled.
We’d made lots of big plans; being it would be our last weekend together before she and her siblings left for a six week stay at her father’s house, out-of-state.
Working Dog Weekend was one event on the list.
One of them that wasn’t going to happen.
On Saturday we stayed home. She slept, ate ice pops and stayed close to the potty.
On Sunday morning she was not looking well, was a little shaky and refused to eat anything I put in front of her, including jello. (Though I knew she was not sick anymore, only weak and possibly dehydrated a little- though she would not listen to me and continued to work herself up at the mere thought of eating breakfast.)
No fever, plenty of color in her face now, I knew she was better but she just wouldn’t budge.
She’d eaten a late dinner with the family the night before and she’d kept it all down. (Chicken and peas…if that didn’t come up, I was certain she was safe.)
Back to bed she went.
It was 10:30am.
No dog show for her today-it’d already begun and we had now missed the first thing she'd wanted to see, the K-9 Dog Demonstration.
The schedule of doggie events for the day was packed and she would not be able to see this again until next year (if at all-since they are usually not here during this event).
She wasn’t sick and if I didn’t get her to this Dog Show, we’d both regret it.
After checking on her incessantly, she grew tired of it and finally agreed to get out of bed and into the shower.
I then talked her into going outside for some fresh air. (I wonder now, looking back, whether I’d actually given her a choice?…LOL.)
But she did it…
Sitting in her chair outside, with her dog blanket wrapped around her, she read a few chapters of (surprise, surprise) a dog book.
I eventually convinced her to eat a mini bagel. (I knew she definitely wasn't ill when she requested cream-cheese.)
Low and behold, she’d finished not one half, but two tiny bagels, and in no time at all she was alive and bouncing around the house thanking me for pushing her to eat!
(Grrrrrr.)—But this is a good thing, right….
She and I, and her siblings, all went to Working Dog Weekend, but vowed to stay for just 2 hours and a couple of demonstrations, as not to over do it.
Later on at dinner we shared our good, bad, funny, random acts of kindness and our learning thing like we do almost every night…
Her sister and brother's good things were that Mommy got Tatum to eat and so she felt better enough to go to the Dog Show.
My learning thing was that the apple doesn’t fall far from the tree.
I say that because today I realized my daughter (the child people say is my little twin-Lord help me) is stubborn as hell!  (Though I have no idea where she gets that from;)
My daughter’s learning thing?
Verbatim:
Mommy Knows Best.
No Regrets Today- for either of us.