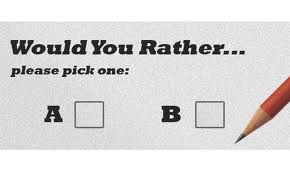 My kids like to play a game called ‘Would You Rather?’.
I’ve always liked getting in on the fun because they usually freak out when it’s my turn to ask, ‘Would you rather?’.
I will ask, ‘Would you rather…have to go to school for 365 days a year, or go without television forever?’
Or when I say, ‘Would you rather eat broccoli at every meal, or spinach?’.
It’s fun to watch them squirm.
Now here is one for parent’s.
School shopping is finally coming to a halt (thank goodness) and there are a few items on the market that I want you to see (if you haven’t already gasped at them yourself).
They are:
JCPenney’s (recently controversial) Shirt for Girls:
And the 'Eye Candy' (yes, it says Eye Candy on it-actually ALL over it) notebook that I hear no one talking about and which is selling at Walmart:
So, hear it goes….
Mom, Dad, Grandma, Antie….etc…..
'Would you rather' have your teen (or younger) daughter wear the ‘too pretty for math’ shirt?
OR
'Would you rather' have her carry the 'Eye Candy' notebook (which I do not have a picture of at the moment)?
Are ya squirming yet?

Go to Change.org to see more things the community is working on changing
and read more about Change.org Here.