Did Mom's 'Connection' Help? (See the grade on the project from last week) 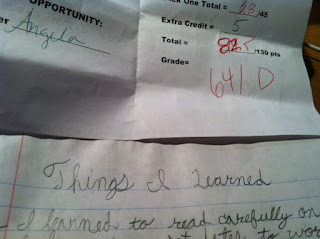 Last week, I wrote about how my daughter had a project to do for school in which her teacher gave the class three weeks to complete it.

My daughter (not crazy about writing/book projects) dragged her feet on it, finished it at the last minute and not without some prompting. It came out terrible and I was disgusted with her lack of effort.

Long story short, it wasn't her first time trying to slide in under the wire and I mentioned this to her teacher. Call me a bad mother, but I was hoping she would be graded fairly...and I mean 'FAIRLY'.

I cannot say that I'm proud of my daughter, but I will say how proud I am of her teacher.
She gave my child the grade she deserved.

I know that I may have been the one who gave her teacher a heads up to the lack of work on this project (once again, I say go ahead and call me a bad mom) but the teacher saw what I saw, and just followed through by doing the right thing-she graded her accordingly.

Seeing a classroom full of children and their potential, knowing that not every kid has help at home, being pressured to keep district test scores high, I can just imagine how difficult it must be to teach in the America, but, when it comes to my child's grade, I only care about one thing...I want what is due, nothing more, nothing less. If that equals a bad grade, than so be it.

So, now, my daughter has completely dropped herself out of the running for the contest we do at home and she had to listen to the 'mom' lecture, as well as write down as many things as she could about what she learned from this experience, then had to email it to her teacher.

A 'D' is unacceptable. If she put in the effort, she would have gotten at least a 'C'.

She admitted quickly that she was capable of an A, had she at least shown more initiative.

I am not happy, but I am satisfied.

According to her list she made, this fair grade has taught my daughter many things...here are some of them:

There are other lessons she listed, but these things right here tell me, that because she was judged fairly, she learned these valuable lessons:


goal setting
giving 110%
critical thinking
and
belief in herself.

As a parent, I couldn't have asked for anything more.