What's in a Child's Name?


This week my son's third grade class was talking about where they're names came from.

I was sure he knew his story, but he couldn't seem to remember it. So, I told him again.

Afterwards, he just sat there...staring at me, with his mouth wide open; shocked. Finally, he spit out a "WOW".

The day after, I asked him if he remembered to tell his teacher where his name came from.

He said yes, and that his teacher replied:
"Wow! I can't believe your mom named you something so good because of something so bad."

On September 11, 2001, I was two weeks away from giving birth to my second child.
At the time we didn't know if it was a girl or boy and had not yet landed on any names in particular.
We picked two names and waited for the baby to be born.

The baby turned out to be a girl....our boy name was put on the shelf.

Twenty months later, I gave birth to our last child (a son).

What's in a child's name?

As I watched the events of September 11th unfold on my television that day, I got a rush of panic. At nine months pregnant, I wondered what I was doing choosing to bring more children into this world amongst all of this chaos. But, as much as I worried about my children, their children and the future of our nation.... I knew I couldn't think that way. I had to live my life and just encourage (and be) the change we all want to see in the world.

I tell my son, that although we didn't know anyone personally who was killed, hurt, or whom may have served on emergency teams during that days tragedy, we still feel it was a very sad event; an extremely senseless, horrible event...and that even though things like this may happen in the world, parents are bringing new generations (like him) into the world and believe they will play a part in making it better.


Later on, during my son's school day, his class answered some more questions about themselves...
and now his teacher also knows Justice's career path...

I didn't pick that career for him. He did it himself when he was just three years old. Way before I ever dreamed of explaining to him the meaning of his name.

On the day President Obama announced Bin Laden had been found and executed, my ex-husband texted me...

Do you remember where Justice's name came from? ....

We are strong,
We are hopeful,
We are America.
And, if we live in fear, we are not FREE. 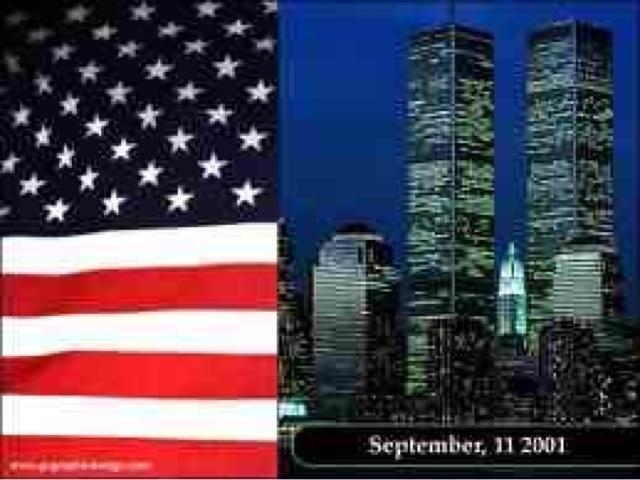 Stand up, stand tall, and believe in the future...
Remember September 11, 2001, the victims, their families
and those who serve our country today in pursuit of a better world.